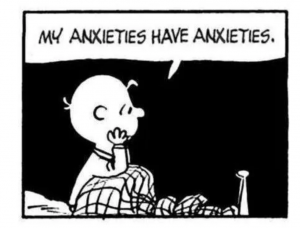 This was the title of a recent article in the 7 June 2022 edition of Forbes Magazine by Tomas Chamorro-Premuzic.

The article is excellent.  Tomas begins by summarising how we are living under significant social pressures to inhibit their anxieties.  Organizations emphatically promote a happiness cult, replacing negative feedback with strengths-based coaching and Chief Happiness Officers. Managers are now hiring for emotional intelligence, grit, and resilience.  Tons of self-help columns are devoted to quench people’s self-doubt, imposter syndrome, and insecurities.

There is also a booming pharmaceutical market to suppress anxiety, neuroticism, and quash negative emotions altogether. the pursuit of happiness has turned into a biochemical quest.  The US with just 5% of the world’s population. accounts for around 40% of the global pharma market,

The anti-neuroticism cult is often justified in terms of productivity: stop worrying, being negative, or feeling anxious, and your productivity goes up.  Decades of scientific research show that there is generally a negative relationship between neuroticism and career success. For example, you are more likely to be promoted to management or leadership roles if you are not neurotic. Likewise, how employable you are deemed by others, and positively your school and academic performance is rated, can be predicted by your neuroticism: the lower it is, the more favourably you are regarded.

According to Tomas around 30% of the global population can be expected to score between above average and high on neuroticism, so they have an inherent (and biologically determined) tendency to worry a more, make pessimistic and negative interpretations of events, and be self-critical. Unless they can somehow replace their personality, we should not expect them become cheerful or optimistic.

Another claim that Tomas makes is that cultural attempts to numb or extinguish neuroticism inadvertently inhibit creativity. I totally agree that most progress in the world depends creative people who can generate and test ideas.  These people are generally high in the Artist component which when combined with low Regulator are really creative.  Steve Jobs is an excellent example. His neurotic obsession led to persistence, and artistic and creative perfectionism.

Tomas argues that if we selected and funded entrepreneurs on the basis of their high “emotional intelligence” (a groovier way to describe low neuroticism scorers), they would be far less likely to demonstrate a sense of urgency, or a deep dissatisfaction with the status-quo, including traditional employment.  The self-made billionaires who were too grumpy, contrarian, anarchic, and intense to put up with a boss, have their high neuroticism to thank for being deemed unemployable by others, and even by themselves. We should be thankful, too.  I agree.