Book Review: ‘How Emotions Are Made: The Secret Life of the Brain’ 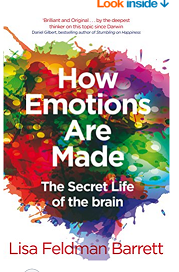 If you are interested in the field of Emotional Intelligence this is a must read.  While Goleman’s book popularised the subject, this book completely revolutionises one’s thinking about emotions.  More importantly Lisa Feldman Barrett is an actual scientist unlike so many who write on the topic yet she has a clear, concise writing style that makes this book a pleasure to read.  As someone who went to Cambridge and studied Natural Sciences may I take my hat off to the author for writing this book.  I would rank it with Darwin’s On the Origin of Species.

As a writer and blogger on emotional intelligence I have already raised doubts on a number of popular beliefs.  For example, I believe Amygdala Hijacks are rubbish.  I don’t believe separate parts of the brain are the source of emotional footprints.  I have attended a lecture by Paul Ekman and paid for and did his course on micro-expressions.  Yet for the life of me I totally fail to read facial emotions.  At the 2016 Emotional Intelligence Congress in Oporto all the 300 papers and presentations except one used the Salovey-Meyer model of emotional intelligence.  My paper did not.  As a result, I considered myself to be an outsider crying in the wilderness.  No more.

Feldman argues and demonstrates how many of our most basic beliefs about emotion are myths.  A face does not speak for itself and our facial expressions can be misleading.  Gender bias plays a crucial role in misunderstanding people women are not more emotional than men.  There are not dedicated emotion circuits in the brain and the seven core emotions of Paul Ekman as used in “Inside Out” are a myth.  Emotions are not already built in your brain.  They are constructed by our brains as we mature.  Physiology does not depend on emotion but on action.  The brain is not reactive but predictive.  Limbic regions are not reactive but predictive.

While Feldman does allow for some emotional activity to be genetic she spends little time in this area.  I believe in this she is wrong.  Temperament is our genetic emotional pre-disposition.  I am a strong believer in the 7MTF/Humm model of temperament that proposes our temperament depends on our position on the spectrum of seven genetic mental illnesses.  I think her book is weakest when she suggests depression and autism are socially caused.

If you want to get a taste of Feldman’s work there are several good lectures on YouTube.  The first I would recommend is Wired talk that lasts 17 minutes:  The Three Big Myths About Emotions, Gender and Brains | Lisa Feldman Barrett.  The second is a one-hour lecture that summarises her work Lisa Feldman Barrett: Emotion inside out.  However, you really need to read the book to understand her theory.

Finally, Feldman graciously credits Ekman for his work in her acknowledgements.  How he feels about her is open to conjecture, but her demolition of his work is pretty thorough.

“You can knock forever on a deaf man’s door.” – Emotional-intelligence

[…] followed up this blog with two others: Another Emotional Intelligence Cornerstone is Crumbling and Book Review: ‘How Emotions Are Made: The Secret Life of the Brain’. However the posting from UCal challenges decades of research positing that emotional intelligence […]