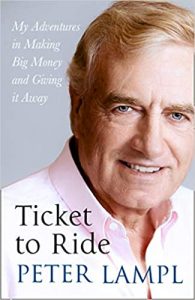 I received copy of this book shortly after its release in June 2021.  I went to the back cover and saw the endorsements were from Michael Bloomberg, Boris Johnson, and Gordon Brown.  My first reaction was to say to myself, “Peter, where is the Queen?”

Seriously this is a terrific book and highly recommended.

Peter and I both did an MBA at the London Business School in the early 1970s.  When we finished, we did a road trip from San Diego to New York in Peter’s newly purchased Mustang and my (at the beginning) empty credit card.  It was a great trip and Peter devotes a chapter in the book about this time.  He is responsible for me making 2 life changing decisions for which I will always be grateful.  On the trip he convinced me to marry Vivienne and follow Charles Handy’s advice to reject the offer to work at McKinsey in New York and become a salesperson.

Only now I have read the book do I realise the similarity of our backgrounds.  We both had immigrant fathers, we both went to the local grammar schools, we both went to Oxbridge to read chemistry, we both did an MBA, and post the MBA we both left England: Peter went to the USA and I to Australia.  In terms of wealth our paths then certainly diverged; Peter was the first of our MBA year to reach £100 million.  He was the first to tap into the Private Equity/LBO band wagon.

I now realise that Peter is in temperament a natural entrepreneur.  I knew he had a lot of GoGetter in his temperament.  Now I realise his other dominant component is the Engineer.  If you are going to study chemistry you need to have a lot of conscientiousness in your personality.  Peter correctly believes that his focus on data and numbers when analysing a business has been a key to success.  And you don’t do that unless you have a high numerical IQ.

However what I found really inspiring in the book was what he did after he had accumulated his wealth.  He funded (anonymously, very smart) the campaign to ban handguns in the UK.   Then when he realised the decrease in social mobility that had occurred in the UK due to the closure of the grammar schools he set about reversing the trend.  Due to his efforts every year 7,500 UK senior school students from poorer backgrounds attend one-week introductory courses at top-level UK and USA universities.  Something like 99% are offered places, many with scholarships attached.  Unlike so many successful entrepreneurs Peter has a moral compass.

The book is a great story and extremely well-written thanks to the efforts of Giles Smith, one of the best journalists in the UK.  It contains a number of useful tips.  My favourite was that if you want to make money you should invest in businesses that will instantly bore people at cocktail parties.  His story is also vindicates the insight of Charles Handy, to succeed in life you have to become good at 1-on-1 meetings.  And Vivienne and I are so happy that Peter, at the third attempt, has managed to find a great partner in Susan.

This blog was first published on LinkedIn on 16 August 2021.