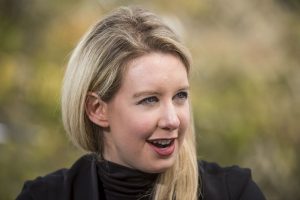 This is probably the book of 2018 with apologies to Jordan Peterson.

As a former venture capitalist for 25 years this book is fascinating reading.  Most books derived from Silicon Valley are hagiographic biographies of successful founders.  This tells the story of an unbelievable failure, namely the rise and fall of Theranos.

The company was founded in 2003 by 19-year-old Elizabeth Holmes.  It raised more than $700 million and achieved a maximum valuation of $10 billion in 2013.  Theranos operated in the blood testing market claimed its technology was revolutionary and that its tests required only about 1/100 to 1/1,000 of the amount of blood that would ordinarily be needed and cost far less than existing tests.

The problem was the technology did not work but this did not Holmes and her Chief Operating Officer, Sunny Balwani, acting dishonestly to raise money from investors and signing contracts with Walgreens and Safeway.  Various employees along the journey tried to act as whistle-blowers either about the technology or financial projections.  Every time they were accused of not being a team player, summarily dismissed, made to sign non-disclosure agreements, and threatened with lawsuits from the highest profile lawyer in the USA, David Boies.

The turning point was in October 2015, when investigative reporter John Carreyrou of The Wall Street Journal questioned the validity of Theranos’ technology.  Since then, the company has faced a string of legal and commercial challenges from medical authorities, investors, the U.S. Securities and Exchange Commission (SEC), Centers for Medicare and Medicaid Services (CMS), state attorneys general, former business partners, patients, and others.  Bad Blood published in May 2018 chronicles the decline.  On June 15, 2018, the U.S. Attorney for the Northern District of California announced the indictment of Holmes on wire fraud and conspiracy charges. Balwani was also indicted on the same charges.  What amazes me is that Holmes, while no longer CEO, is still the Chairman of Theranos.

My favourite take-aways from the book are three.  Firstly Holmes tried every trick to stop Carreyrou publishing his first article.  In particular she lobbied Rupert Murdoch, owner of the Wall Street Journal, and who had invested $125 million in Theranos.  Rupert, to his credit, said he did not interfere in the editorial side of his businesses and let the article run.

Secondly Carreyrou trying to work out what made Holmes tick suggests she is a sociopath.  I disagree, she is a corporate psychopath, totally genetically driven by the desire to make money and if not blessed with a moral compass will unreserved lie and use fraudulent methods to achieve economic success.  Holmes is Hustler/GoGetter in my emotional intelligence profiling technology.  The giveaway was when she was nine years old and asked what she want to be when she grew up, she replied a billionaire.  When she was asked whether she would rather be President, she said no because the President would want to marry her because she had a billion dollars.

Finally, Carreyrou is mystified by the relationship between Holmes and Balwani in that they were in a relationship together.  One of great lessons of my emotional intelligence workshops is that we like those who are like ourselves.  Balwani was as a much a psychopath as Holmes.  He would fake his scientific knowledge causing much humour among his employees but was utterly ruthless in his treatment of them.

One can only have sympathy for the employees of Theranos.  Working for one corporate psychopath at the top is bad but working for two psychopaths at the top would be unbearable.

This blog was first published 13 August 2018 on LinkedIn