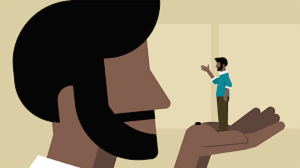 Recently the Institute of Managers and Leader posted a new webinar ‘5 ways to Build your Self-Awareness’. The presenter was Brisbane-based Kerrie Anne Cassidy. While there were certain aspects of the webinar I would query there were also so very useful ideas.

Self-Awareness is the first of Goleman’s Four Emotional Intelligence components which is sufficient reason for it to be important. Cassidy states that self-awareness is important because “Your cannot change the world, You can only change yourself, And in so doing, Influence those around you in positive or negative ways.

One could argue the above statement is inconsistent in that if you are influencing others you are changing the world. And I would say Goleman’s book itself is a good example of someone changing how the world acts and sees itself. Nevertheless, self-awareness is the critical first stage in developing emotional intelligence.

Cassidy then moves on in the webinar by using medical concept of triage to develop self-awareness by suggesting three steps:

I must confess I thought the most useful idea in the webinar was the seeking feedback section. Cassidy suggests that you finish the feedback session by thanking them, and subsequently going back and telling them what you have done with the feedback. Then you thank them again. This is a very powerful suggestion.

Developing Emotional Awareness is very important. As the webinar correctly notes your personality, values and beliefs uniquely influence your thoughts, feelings, motivations and behaviours in various situations. They can help and hinder your interpretation of events and how you think, feel and act in response.

Cassidy, like so many, is a Myer-Briggs acolyte which I believe is a poor tool to increase you emotional intelligence. To me the MBTI is a tool to discover how a person makes decisions. This is useful to know but what you really want is a profiling tool that helps you understand the core emotional components of your own temperament and the temperaments of others. That is why I preach the use of the 7MTF/Humm as a tool to lift your emotional intelligence and the first step that I do with my coaching clients and workshop participants is ask them to complete the PEQAS.

This article was first published on LinkedIn on 2 December 2019.