These jobs are most likely to attract psychopaths

These jobs are most likely to attract psychopaths is an article that recently appeared in the Human Resources Director magazine.  The article makes use of a list that appeared in The Wisdom of Psychopaths by Professor Kevin Dutton.  The book lists the following occupations where corporate psychopaths are likely to be found: CEO, Lawyer, Media (TV/radio), Salesperson, Surgeon, Journalist, Police officer, Clergy, Chef, and Civil servant.

I have reviewed Dutton’s book in a separate blog but I thought that it would be useful to run through the list using the 7MTF/Humm emotional intelligence model.  Going through the 10 occupation:s

CEO:  There is a no question a lot of CEOs have the GoGetter/Hustler component in their temperament particularly in the larger corporates.  More would have the Politician as dominant component but many would have both components as foremost factors.

Lawyer:  The successful lawyers, particularly the rainmakers in the major law firms have a high GG/H component but now to gain entry in university law schools you need both a high IQ and high Regulator/Normal and Engineer components to pass the exams.

Media (TV/radio):  No question a lot have a high GG/H component but also many have a high Socialiser/Mover component.

Salesperson: Again many salespeople, particularly those working in industries that require consultative selling uncovering the prospect’s needs and wants during the sale, need a high GG/H to be successful.

Surgeon: It was a surprise when I first read about the psychopathic traits of surgeons in Dutton’s book but he makes the point that to be successful surgeons need to love cutting people.  I guess the same logic applies to veterinary surgeons.

Journalist: There is no doubt that successful journalists contain considerable GG/H in their temperaments.  Rupert Murdoch is a classic GG/H but he does have a lot of Engineer.

Police officer: I think it was Norman Mailer who said that no psychological test had yet been developed that could distinguish between a cop and a criminal.

Clergy: Around 14% of the population have strong GG/H in their temperament and I would expect the same proportion in clergy.  Most are concentrated in the southern evangelical churches of the USA.  “You don’t get rich writing science fiction. If you want to get rich, you start a religion.” L. Ron Hubbard the founder of Scientology.  For the majority of clergy high Doublechecker would be the norm.

Chef: Same as clergy – most of the celebrity chefs have high GG/H while for the majority of chefs high Artist and Engineer would be the norm.

Civil servant:  Here I would disagree.  Most civil servants are high Doublecheckers but again in the higher echelons Hustler and Politicians prevail.

Since April 2015 I have completed 802 PEQAS profiles.  There is no doubt that the GG/H component is the rarest of the seven components as the chart shows. 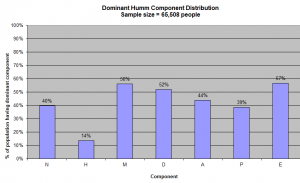