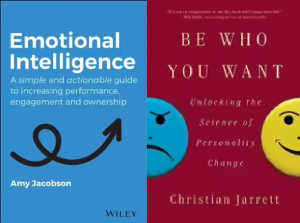 As is now the modern way I recently received two podcasts where two authors were interviewed about their newly released books on Emotional Intelligence.

The first podcast was an interview with Amy Jacobson, the author of Emotional Intelligence: A Simple and Actionable Guide to Increasing Performance, Engagement and Ownership.  After listening to her podcast I decided not to buy her book.

Secondly Jacobson claims that children are more emotionally intelligent than adults.  The core example of Emotional Intelligence used by Goleman is the Mischel’s Marshmallow Test.  The key finding by Micshel is that only 10% of the children tested had the self-control to delay emotional gratification.  Goleman believed this low result for self-management demonstrated  low emotional intelligence for the majority of children.

The second podcast was an interview with Christian Jarrett about his new book Be Who You Want: Unlocking the Science of Personality Change.  On the evidence of the podcast this could be a book worth reading.

One part of the interview I found particularly interesting was when Jarret discussed the effect of aging on the Big Five Personality Traits.  According to Jarrett as we age Extraversion and Openness to Experience tend to decline, and Agreeableness increases.

Conscientiousness increases to a peak in mid-life.  Supposedly it then decreases in the second half of our life as we longer have to go to work every day, or socialize with people we don’t really like.  This has been defined as the Dolce Vita effect and at age 76 I understand it completely.

Neuroticism, or Emotional Stability shows a different, U-shaped pattern. Overall, the data suggests that neuroticism decreases through most of adulthood, then increases again in older age. This is consistent with the idea that in old age, we tend to become anxious about terminal illnesses and death.

Emotional Stability which I call the Regulator/Normal in the 7MTF/Humm temperament model definitely increases with age and acts as a moderator on the other six components.  For example how much Extraversion declines with age, or is moderated by the increasing Regulator is a moot point.  I tend to think it is much more the latter.

And speaking of Podcasts I described my EQ journey in this recent webinar: The Two Secrets to Career Success.

This blog was first published on LinkedIn on 26 May 2021