What’s The Real Secret To Success? 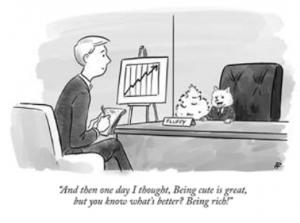 Sally Percy had just published an article in Forbes asking the above question.  While she admits she does not really know she suggests it is some combination of enthusiasm, luck, persistence, family support, physical fitness, and a moral compass.  I admit all can play some role but she has missed the real secret to success.

In 1972 I was halfway through completing an MBA course at the London Business School.  Charles Handy was my tutor.  This was before Charles had written his first book and had established himself as a leading British management guru.  Nevertheless, Charles was already a quirky character and well-known even then for his lateral thinking.

I had just been offered a position with McKinseys in New York after being flown there twice for interviews.  When I told Charles about the offer (certainly the dream job of every MBA student at that time) he advised me to reject it!  Instead he suggested I start my post-MBA career as a salesperson!

His reasoning was as follows:

At this time, England was suffering economically.  In the beginning of 1972, the miners struck for nine weeks and in the summer, there was a national dock strike.  In particular, I remember a debate at the London Business School on whether the LBS should support the miners.  The vote in favour of the miners was 98-2.  I should add that I was one of the two dissenting votes.  At the time the English miner was working seams by hand that were less that 30cm thick.  Australian coal miners were operating drag chutes across 100m thick seams of coal that could fill a truck in about five minutes.  I seem to remember that an Australian coal miner was 100 times more productive than a UK coal miner was and the annual government subsidy to keep the UK miner in his job was something like four to five times his average wage.  Yet here at the newly created temple of capitalism in the UK the vote was 98-2.  I gave up.  If you had said to me then in 1973 that England 30 years later would be the enterprise engine of Europe I would have said that was impossible.  (Remember this was six years before Thatcher.)

Anyway, the two of us who voted against the miners both decided to emigrate to Australia and I was one of the last of the ten-pound Poms.  International Computers Limited had offered me a job in Sydney and used  the scheme to fly me to Australia in October 1973 about two weeks before the official opening of the Sydney Opera House.

I manoeuvred my way into a position as a trainee salesperson. During an in-house training program, I was introduced to the Humm-Wadsworth personality profiling system.  It is fair to say that the workshop was a moment of epiphany.  Until then I had believed that deep down all of us were the same.  After the training course I realised how different we all are, particularly in how we react emotionally.  I used the Humm methodology very successfully and ended writing two books: one for salespeople, the other for managers.

Charles was right.  Now at 73 I can review a reasonably successful business career and note that it was several key meetings that determined the level of success.

This blog was first published on LinkedIn on 28 May 2018.