You always see a red tie

You always see a red tie

On 18 May 2015 Australian Stockbroker BBY was placed into voluntary administration. The picture below appeared in many of the newspapers 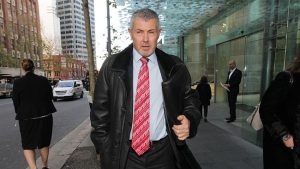 The man wearing the red tie is the former executive chairman of BBY securities, Glen Rosewall, the son of Australian tennis great, Ken Rosewall. Mr Rosewall said: “I put my heart and soul into BBY for 11 years and I’m devastated by what’s happened.”

Stockbrokers and investment bankers to succeed need a lot of Hustler Component. A person with a ‘strong H’ will have a drive for Material Success. This means enjoying money and the things that money will buy. The H is quick, opportunistic, shrewd, entrepreneurial, and charming. This person has a ‘nose’ for a deal and they’ll quickly work out if you can help them do the deal or not. They’re also short-term – they want results now, or very soon. Promising an H a significant financial reward next year will probably not interest them. They are very loyal to their own families and team. But mostly they’re loyal to themselves and they will work hard to make sure they get what they believe they’re entitled to.

I will never forget a morning presentation I was asked to give shortly after I joined the Bankers Trust Australia in 1981. It was on the Humm-Wadsworth profiling system and about 60 people attended. At that time there were three silos in the bank.

The first silo comprised the fund managers. Preservation of capital and the ability to read the copious reports supplied by over 100 stockbroking firms dominated their life and most of their personalities had very strong Doublechecker and Engineer components. About 20 of them came to the talk.

In the second silo were the Corporate Financiers. They spend most of their time with company CEOs and government officials working out mergers and acquisitions or privatisations. They were the corporate salespeople with lots of competitive pitches and presentations. About 15 came to the talk. They were dominated by the Politician component.

Finally in the third silo were the money market dealers who dealt with various money market instruments such as bank bills, CDs and bonds. Their day was dominated by buying and selling orders and constantly hustling their clients. As an aside I said that one way you recognise Hustlers was that they always wore red ties. A murmur slid into laughter into uproar as the whole audience realised that every one of the 35 money market people attending the talk was wearing a red tie. The talk became famous in BT as the “Red Tie” talk and my place in the organisation was assured.

Some wonderful comments have emerged about BBY since the administration.

It turns out BBY had invested in Firestone Energy, a dual listed Australian and South African coalmine developer, that in 2013 was acquired by dual listed South African miner Waterberg Coal. BBY’s holding in Firestone at the current share price of half a cent is worth around $3m, the company has been unable to trade since March after Standard Bank called in a loan ­facility worth $35m due on April 9 this year. Nevertheless BBY was claiming the investment was a liquid asset to the ASX. Stretching legal definitions is typical of the Hustler.

Other options traders said BBY had grown rapidly because it charged the least of any of the brokers. Rates were set at just one basis point (0.01 of one per cent) per trade. Hustlers are notorious for buying on a discount, and equally notorious when selling to alway sell with a discount.

“BBY is known as the Hedge Fund Hotel because of all the micro hedge funds who rent space in the BBY office,’’ said one major fund manager. Micro hedge fund managers are infamous traders and birds of a feather flock together.

One of the unfortunate changes in business life is that more and more men are not wearing ties. They were such a great window into the temperament of a male.