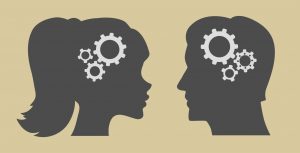 There is an interesting blog/debate about the above question in the 23 April 2019 edition of BPS Research Digest.  Neuroscientists studying over 100 foetuses came to the conclusion that “sexual dimorphism in functional brain systems emerges during human gestation”.  In other words male and female brains are different and the difference occurs genetically.

Gina Rippon, Emeritus Professor of Cognitive Neuroimaging at Aston University and author of The Gendered Brain, disagrees with these findings.  Speaking as a neuroscientist Rippon carries out a reasonable demolition job on the research  methodology.  Speaking as feminist, Rippon argues that the differences between male and female are due to nurture not nature.

As a proponent of the 7MTF/Humm model of emotional intelligence, I find myself in the nature over nurture camp.  The 7MTF/Humm model states there are seven core emotional intelligence components, the strength of each depends on where it is positioned on the spectrum of the seven most common mental illnesses.  If there was no difference between the sexes there would be a 1:1 ratio of male to female at the clinical end of the spectrum.  However, for four of the mental illnesses there is an unequal ratio.

When you see these ratios you begin to understand certain characteristics of society.  For example in 2014, more than 73% of those arrested in the US were males.  The dominant 7MTF/Humm component would be GoGetter/Hustler.  The majority of nurses and teachers are female.  The dominant 7MTF/Humm component would be Doublechecker.

This blog was first published on LinkedIn on 28 April 2018.