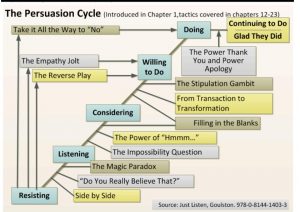 A Senior Consultant with one of America’s leading sales training companies recently recommended Just Listen, describing it as the best book on selling ever written. Inwardly I thought to myself another OTT endorsement but I decided I buy and read this book. While I would not agree it is the best book on selling ever written I would certainly place it in the top three particularly as it is not about selling per se but more on the core emotional intelligence skills of empathy and relationship management.

The above diagram produced by the author, Mark Goulston, is an excellent summary of this extremely useful book. The core premise of the book is that all communication is an effort to get through to people and cause them to do something different than they were doing before. To achieve this goal you have to move the person through five stages: Resisting, Listening, Considering, Willing to Do, and Doing. Where the book is particularly valuable is providing tactics at each stage.

To move from Resisting to Listening you can do the following;

Side by Side: Asking questions during a shared moment, and then deepening the conversation with more questions instead of moving into lecture mode. Think of Socrates who never told anybody anything; he just walked around town with people asking them questions until they figured out the answers themselves.

Do you really believe that? Asking this question in a calm and straightforward manner is very powerful technique in defusing emotional situations.

The Magic Paradox: Instead of lecturing someone to overcome their weakness, empathise with them by saying “I’ll bet you feel that there is no way anyone understands you …” Follow up with “And I’ll bet you’re hesitant to tell me straight out your problems”. This starts a process of agreement known in selling as the Repeated Yes technique.

To move from Listening to Considering you can do the following:

The Impossibility Question: Ask “What is something that would be impossible, but if you could do it would ….” And then reframe the question into something that is possible.

The Power of Hmmm: Instead of trying to defensively calm an emotional person in a meltdown, go deeper by using words like “Hmmm,” “Really,” and “And so.” Let them vent their emotions and slowly turn them from hostility to mild confusion to an ally.

To move from Considering to Willing to Do you can do the following:

From Transaction to Transformation: Ask people questions that let them open their minds and express their intelligence by appealing to their core emotional traits. You sell to the heart and not to the head. Ask yourself, “What single question will show this person that I’m interested in his or her ideas, interests, future success, or life?” Then ask it.

The Stipulation Gambit: Overcome a weakness or an objection by Getting in (quickly and efficiently describe the issue), neutralizing the problem (by explaining how to handle it or why it isn’t really a problem), and getting out (move on to the next topic —do not linger or go into excess detail).

Filling in the Blanks: is again also useful at this stage

To move from Willing to Do to Doing you can do the following:

The Empathy Jolt: Instead of asking someone how they feel ask “How would you feel if you were him right now? Ask them to walk in someone else’s shoes.

The Reverse Play: Instead of being confrontational you instead say you are weak by saying, “You’re probably waiting for me to lay out a list of complaints, like I usually do. However, I was thinking about the reasons why you might be disappointed in me. You’re probably afraid to tell me about these things, because you figure I’ll get defensive. I think the three things are….” Then end with, “Is that true? If not, what are the things that most frustrate you about me?” You do the unexpected by apologizing yourself, and something very different occurs: You shift a person instantly out of defensive mode and cause the individual to mirror your humility and concern.

Take it All the Way to “No”: Until someone says “no” to you, you’re not asking for enough. If you have confidence and you’re willing to move outside your comfort zone, give it a shot—because otherwise you’ll never know just how great you can be at clinching the big deals.

If I could summarise Goulston’s book in one tag line it would be the old marketing adage “zig when you expect to zag.” Goulston repeatedly suggests that you use counter-intuitive tactics when involved in negotiating situations:

This is not easy to do but when I look back at my own career at the few times I have managed to do it, the results have unbelievably effective.

This blog was first posted on LinkedIn on 12 November 2019.