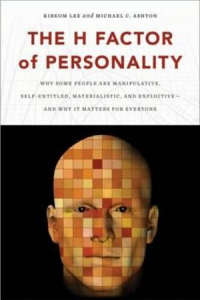 Bruce Lewolt, my American partner, recommended that I read this book.  It was a terrific recommendation and a terrific book.  In addition there is terrific review on Amazon: A Personality Model That Isn’t Afraid Of The Dark dated 26 November 2012 with which I wholeheartedly agree.  The Big 5 Personality Model is missing any reference to the Dark Triad and the H factor handles this.  Lee & Ashton then go on to redefine the Big Five as the HEXACO model with six components:  The HEXACO model is complementary to the Five Factor model. It retains the Extraversion, Agreeableness, Conscientiousness, and Openness to Experience factors of the Five Factor model. The major changes are that it adds the Honesty/Humility factor and replaces the “Neuroticism” factor with an “Emotionality” factor

Lee & Ashton define the H factor as Honesty and Humility.  It is on a bell curve spectrum like the Big 5 factors with around 15% of the population having low H.  For a 7MTF/Humm advocate like myself this caused an immediate problem because its H factor in the 7MTF/Humm is the polar opposite.  The Humm calls people high in the H factor Hustlers and the 7MTF renames them as GoGetters.  So if you are reading this book and familiar with the 7MTF/Humm it does require a mental reversal.  Note the Humm model was developed in 1935 some 77 years before HEXACO.

Another review criticises the book for poorly painting people with low-H.  Indeed the book censures anyone with a low component: low H are described as self-centered, hypocritical; low E – emotional, unfeeling insensitive; low X – inhibited, gloomy; low A – headstrong, blunt; low C – absent minded, messy; low O – conventional, close-minded.  I do agree this is a weakness.  For example I worked in venture capital for 25 years and we psych tested over 50 entrepreneurs.  We discovered that the successful entrepreneurs had high Hustler and Engineer components along with high numerical IQ.  (They all had high verbal IQ.)  We describe our High Hustler (low H) people as entrepreneurial, shrewd, commercial hard-headed, and materialistic.  These people are charming and flexible.  If they have a moral compass defined as high Normal/Regulator (or low emotionalism or neuroticism) they often become successful business people.

Lee & Ashton say it the book that using factor analysis techniques they could only extend the five factor model to six.  However Humm & Wadsworth in 1935 who were among the first to use factor analysis in personality testing increased Rosanoff’s five factors to seven.  This it the problem that I have with the HEXACO model.  Where is the Type A personality?  These people are more decisive, highly organized, ambitious, impatient, highly aware of time management and assertive.  They are driven by one of McClelland’s three core drives namely Power.  They want to control and influence others, like to win arguments, enjoy competition, and the status and recognition that winning gives.  Some try to say this is the same as low Agreeableness.  I disagree; those people are brusque yet resilient and composed.  They also tend to be impulsive in their decision making particularly when dealing with people.  In the 7MTF/Humm model these are the Politicians.

Even given the two criticisms above, The H Factor is well worth the read.  Its descriptions of how a low-H acts in the areas of politics, religion and sex are on the money.  Also the chapter on combinations was particularly good.

This blog was first published 26 October 2018 on LinkedIn: