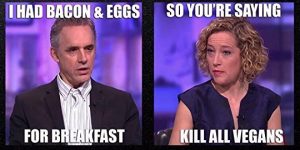 Following Jordan Peterson’s triumphant speaking tour of Australia I promised in my April 2018 newsletter that I would read and review his book “12 Rules for Life: An Antidote to Chaos”.  I have now read the book but what I did not realise is that our paths had already crossed.

On 6 May 2016, Peterson wrote a reply on Quora denying that EQ exists.  Then on 2 March 2017 I wrote a comment to his blog saying that I, even as an EQ practitioner, agreed with most of Peterson’s reply.  My comment was a repetition on my mantra that temperament is the key to lifting you EQ and that the most practical model of temperament is the 7MTF/Humm.  I would commend the whole Quora conversation to you as it provides a very good insight into Peterson’s character.

The book is worth reading.  This quote from New Statesman sums up the book beautifully.  “It is that rare thing: self-help that might actually be helpful.”  It is also worth watching the interview between Peterson and Cathy Newman.  The cartoon attached with this blog says it all.  Newman continuously tries to put words into Peterson’s mouth yet he demonstrates unbelievable self-control and constantly and logically rebuts her.  Accordingly, I would regard his Regulator/Normal temperament component as high.

Peterson is very stubborn as demonstrated by his defence of free speech in refusing to use gender-neutral pronouns despite the Canadian Government passing compelling legislation and publicly defending James Damore, the sacked Google employee who suggested there were innate gender differences.  The book itself is a exceptionally creative piece of writing.  Peterson leaps from the Bible to Dostoevsky to Nietzsche yet writes with clarity as he explains the logic behind his 12 rules.  There is perhaps a little too much Jung and Freud for me but Peterson has spent 20 years as a psychotherapist so such an emphasis is understandable.  So, one has to conclude his Artist component is also at the high end of the spectrum.  He particularly defends the personal liberty of the individual against the proponents of radical identity politics.

Finally I read that he suffered from clinical depression.  This might be hearsay but Peterson also has a lot of the Doublechecker component in his temperament.  In the last chapter Peterson describes the personal struggles he and his family went through when they discovered his daughter, Mikhaila, had a rare bone disease.  It is an incredibly compassionate piece of writing.  He believes that searching for happiness is a fruitless aim.  Instead he says that what we have to do is learn to walk the line between masculine order and feminine chaos.

Normally you do not find ADs becoming the centre of attention.  However the high intelligence and strong self-control of Peterson are great strengths.  Also his use of social media (his YouTube channel contains 40 hours of lectures) and his political positioning has brought him deserved fame.  Last month the New Yorker published a review of his book: Jordan Peterson’s Gospel of Masculinity.  Great title but the author, Kelefa Sanneh, does not seem to me to really understand what makes Peterson tick.

This blog was first posted on LinkedIn 5 April 2018.