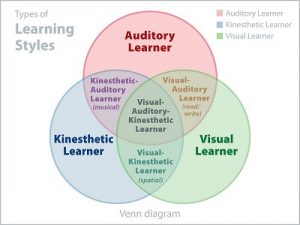 I recently received a marketing email from The Coaching Room.  As I do coaching myself I clicked on the offer only to discover that its base technology was NLP.  I told their representative making the follow-up phone call that I used a different technology and that I had my doubts about the scientific validity of NLP which surprised the caller.

These doubts were reinforced by a recent blog “Another nail in the coffin…”.  The cornerstone of NLP technology is the VAK (Visual-Audio-Kinesthetic) model of learning styles.  The blog describes a study done at the University of Indiana.  At the start of term, Polly Husmann and Valerie Dean O’Loughlin asked hundreds of undergrads on an anatomy course (which involved lectures and practical lab classes) to take one of the most popular online learning styles surveys, the VARK. Taken by millions of people worldwide, the VARK categorises students according to how much they prefer to learn visually, via auditory information, through reading and writing, or through kinaesthetics (by doing or by practical example).

This is of course is not news.  In another blog produced by the British Psychological Society “10 of The Most Widely Believed Myths in Psychology” Myth #1 is that we learn more effectively when taught via our preferred “learning style”.  Over 96% of British teachers believe this myth yet psychology research shows consistently that people do not learn better when taught via their preferred learning style.

Myth # 9 is that Neurolinguistic Programming (NLP) is scientific.  A minority of psychologists are trained in neurolinguistic programming (NLP) and advocate its use but it was developed by two self-help gurus in the 1970s who simply made up their own psychological principles after watching psychotherapists working with their clients. NLP is full of false claims that sound scientific-ish, such as that we each have a preferred “representational system” for thinking about the world (which translates into learning styles), and that the best way to influence someone is to mirror their preferred system. A forensic trawl through all the claims made in NLP programmes found that the overwhelming majority are piffle.

This blog was first published on LinkedIn on 7 April 2018.  NLP and Emotional Intelligence https://www.linkedin.com/pulse/nlp-emotional-intelligence-christopher-golis/?published=t