On Bullies and Psychopaths 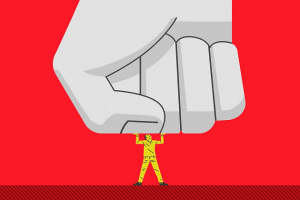 Recently the Wall Street Journal published this article by Elizabeth Bernstein: Why It Seems Like Bullies Are Everywhere—and How to Stop Them.  The sub-title was Bullies try to intimidate people they see as weak or vulnerable. Here’s how to respond.

Bullies are egotistical: they are boastful, vain and opinionated.  They suffer from I-strain.  They talk a lot about themselves and their achievements.  If they think someone is weak they just bulldoze them.

Psychopaths are well defined in the article.  They are egocentric and only listen to one radio station WIIFM: What’s In It For Me.  As the article says these people are often Machiavellian, sadistic, and narcissistic.  I totally agree.  They are also said to lack empathy.  I disagree.  What they lack is compassion to their fellow man.  However, they do spend a lot of time trying to work out what makes someone tick.  They imagine walking in their shoes.  They see themselves as playing a game and working out how to gain an advantage over someone or use them.  People often think that empathy means sympathy.  It doesn’t.

One of the great strengths of the 7MTF is that it separates out the psychopaths and the bullies.  The former are known as GoGetters and the latter as Politicians.  Of course, occasionally these two EQ components are strong and combined in a person’s temperament.  President Trump is a wonderful example.

We all have both EQ components in our temperament.  The question is how strong each component is.  Both are exhibited in the Lake Wobegon effect.  This is the tendency to overestimate one’s capabilities, was named in honour of the fictional town which was the setting for a popular drama on radio. It always finished “Lake Wobegon, where all the women are strong, all the men are good-looking, and all the children are above average”.  It is now used to  describe a real and pervasive human tendency to overestimate one’s achievements and capabilities in relation to others. To support the view that people in general need to believe that they are above average one author points out that in a survey of high school students, only 2% of the students reported that they were below average in leadership ability.

Not many authors separate these two EQ components.  One who has is Noel Wasserman who published The Founder’s Dilemmas in 2013.  This is a brilliant book.  Wasserman tries to answer the question why so many entrepreneurs are replaced several years after accepting a venture capitalist as a shareholder.  His hypothesis is that it depends on whether the founder wants to be rich or a king.  If the former (the GoGetters) they stay with their company.  If the latter (the Politicians) they are replaced.

As a former venture capitalist of 25 years, I can only concur.  My VC tagline was “5000 business plans, 50 investments, 25 write-offs.”  As VCs we were unusual in that we psych tested our entrepreneurs as part of the due diligence.  In the beginning we were backing “Kings” who were competitive, articulate and decisive.  About ten years in we realised our mistake, the Kings were a problem.  In the mean time the psychopaths kept costs under control, used our investment wisely, built the business and sold it at as significant multiple.  They just wanted to be rich and thankfully had sufficient moral compass to take us along for the ride.

If you want to learn more about the 7MTF watch this short 4-minute explainer video.  If that awakens your appetite to lift your emotional this online-video course: Introduction to Practical Emotional Intelligence: The 7MTF is now available.

First published on LinkedIn on 9 August 2020