Review of film: Professor Marston and the Wonder Women 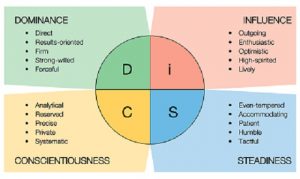 There I was sitting on QF24 flying overnight from Bangkok to Sydney when I started to check what films were available.  Suddenly I saw the thumbnail, Professor Marston and the Wonder Women, and I decided to watch it.

For those who do not know him, William Moulton Marston has three claims to fame:

The film covers all three of these inventions with a very surprising slant.

To those unfamiliar with DiSC (see the image above) it uses two personality traits: Assertiveness and Sociability and it puts you into one of four quadrants: Dominance, Influence, Steadiness and Conscientiousness.  DiSC practitioners make the point that your position is fluid and situational.  For example you can be in a different quadrant socially to where you are in a working environment.  Also you can easily move into a different quadrant depending on what you’re doing and the level at which you are doing it.  For example, your desk is organized but your gym locker is a mess.

The first shock I got in the film was early on when Professor Marston was explaining the DiSC system to his students saying there were four levels of communication: Dominance, Inducement, Submission, and Compliance and alluding to sexual relationships.  Suddenly we are in a world of sadomasochism with the Lie Detector being seen originally as a bondage device.  This was then complicated by a three-way sexual relationship between his wife, Elisabeth, a student, Olive, and himself with both women bearing children.  This leads to Marston and Elisabeth being fired from the university.

William then stumbles upon a shop specialising in fetish art themed comics and photos. The art captures William’s imagination as a demonstration of his DiSC theory. Elizabeth initially disapproves of the art, but she relents during a presentation wherein Olive tries out an outfit that later would be the prototype for Wonder Woman’s costume.  Marston develops the Wonder Woman comic character which becomes very successful, but at the same time it faces growing accusations of featuring overtly sexual, sadomasochistic, and lesbian imagery.  All I will say is that it is the first ‘R’ rated film I have seen on airplane.  Also I cannot believe it got an 87% rating on Rotten Tomatoes.

I must confess that I have always regarded DiSC as too simplistic.  It only uses two temperament variables and puts people into one of four boxes.  Temperament is not relative and situational.  People who have organised desks also have neat gym lockers.  The test itself is ipsative rather than normative.  Ipsative tests measure the relative strengths of traits within an individual by making an individual do a forced choice.  Normative tests compare the individual with the rest of the population.

My biggest criticism of DiSC that the original book is psychobabble.  I have had the misfortune to read the Moulton’s original book The Emotions of Normal People.  The book was unreadable as highlighted by the following quote which Moulton emphasised was the essence of his methodology.

“The total of psychonic (synaptic) excitation, existing at any given moment in the subject organism as a result of reflex tonic motor discharge, may be called for convenience, the ‘motor self’.  Definition of the term does not include any phenomena not objectively described or indicates.

Phasic motor impulses forming psychonic conjunction with tonic motor excitations may be conveniently termed ‘motor stimuli’, and are to regarded as being in exactly the same relation to the motor sefl as are afferent impulses to the organism’s sensory mechanisms.  Motor stimuli thus objectively defined, are not to be confused, under any circumstances, with environmental stimuli, which may be defined as objects or forces acting upon the organism’s sensory receptors.”

This blog first appeared on LinkedIn on 24 February 2018