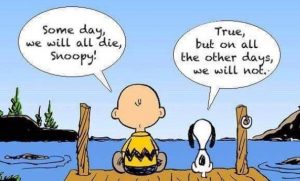 Several days ago I wrote a blog about Marcus Aurelius with particular reference to Donald Robertson’s new book How to Think Like a Roman Emperor: The Stoic Philosophy of Marcus Aurelius. I finished the blog by discussing perhaps the most useful Stoic technique: cognitive distancing.

In this blog I will cover two more useful techniques described by Robertson that I think are particularly suitable in this modern day: Decatastrophizing and Reality Testing.

Decatastrophizing is where we gradually reappraise our judgments about the severity of a situation, of how awful it seems, downgrading it by going from “What if this happens? How will I cope?” to “So what if this happens? It’s not the end of the world.”

Reality Testing is where we reappraise our assumptions about a situation to make them progressively more realistic and objective; for example, re-evaluating the probability of the worst-case scenario or that something bad will even happen at all.

I must confess that when I review my own life I have seen a number of predictions based on prevailing trends fail spectacularly.

When I did my first degree at Cambridge in the mid 1960s, the acronym on everyone lips was ZPG or Zero Population Growth. Dr. Paul Ehrlich, a Stanford professor, had written The Population Bomb, which predicted by the year 2000 massive wars due to overpopulation. The opposite has happened and indeed the major problem now facing many OECD governments is declining birth rates.

When I did my MBA at London in the early 1970s, we were all required to read The Emerging Japanese Superstate, written by the leading futurologist of the time Herman Kahn. The book predicted the dominance of Japan and the demise of the USA. It could not have been more wrong. By contrast during the whole two years at London I don’t think the word entrepreneur was mentioned once. I certainly never heard the phrase “venture capital”.

In 1980, I switched my career from IT to merchant banking. I remember in early 1981 going to a presentation by two directors, who had just spent three weeks in New York and had come back with the drum. Effectively their message was that in you think the 1970s was bad for equities, the 1980s would be an unmitigated disaster. Reagan was going to be a worse president than Carter and for equity investors it was all over. That night the Dow jumped 20 points triggering the greatest bull market ever seen in the history of man.

In May 1984, I was charged with the raising of the $10 million for BT Innovation, one of the seven original MICs that effectively kick started the Australian Venture Capital industry. We raised our money on June 30 – 2,000 cheques of $5,000 each arrived on our doorstep that day and on July 1, 1984 we opened for business. The business plans started flooding in and as the only VC in Australia who had ever written a program or sold a computer, I was the IT industry specialist. As my knowledge was then some five years out of date, I decided I would update it by attending an IDC conference about future industry trends. I will never forget it. The message was that if you think IBM was strong in the 1960s and 1970s wait till the 1980s and 1990s. Their dominance in the mainframes would now extend to the minis and the PCs where because of IBM’s economies of scale no-one would be able to compete. Again, the prediction could not have been more wrong.

Currently our world is caught up in eco-catastrophes and climate emergencies. Man-made global warming is supposedly going to cause sea levels to rise dramatically. I moved to Sydney in 1973 and have always lived near Balmoral Beach. In 56 years the sea level has stayed the same. Indeed one of the best historical measurements of sea level in the world is at Fort Denison on Sydney Harbour. There has been NO significant sea level rise in the harbour for the past 120 years, and what little there has been is about the height of a matchbox over a century. Yet the IPCC and climate alarmists continue their propaganda.

Even more telling were the actions of Julia Gillard, Australia’s first female Prime Minister who introduced the Carbon Tax. When she retired one of her first actions was to buy a $2m beachside house in Adelaide. This is not action of someone worried about rising sea levels. Al Gore made a similar purchase of a $9m beach house in California in 2010. Actions always speak louder than words.

The Peanuts cartoon sums up Stoic philosophy perfectly. It is also worth bearing in mind the words of Cicero, another great Roman philosopher: ‘The art of life is to deal with problems as they arise, rather than destroy one’s spirit by worrying about them too far in advance.’

This blog was first published on LinkedIn on 5 October 2019.

[…] The Emotional Intelligence of Marcus Aurelius […]

Hi Charles There was a great article in The Australian on 17 January 2019 completely debunking the 97% climate scientists myth. May I suggest you read it. Cheers

Chris - sorry. Climate change (despite your personal observations)bis agreed with by at least 97% of climate scientists. And we're talking of a time frame of some 11 years in which we rein back emissions significantly. Not to mention international agreements which are exceptionally difficult to enforce. Mate - respect you as I do, I completely disagree with you on this sociological (not a psychological) matter.