What is the Best Definition of Emotional Intelligence?

If you are interested in Emotional Intelligence then EI Consortium produces a monthly newsletter that may be interest.  Last month you conld download a 90 minute discussion sponsored the Harvard Alumni Club comprising a panel of Helen Reiss, Cary Cherness, and Richard Boyatzis, that was chaired by Chuck Wolfe.  The title of the video Harvard Alumni Panel – Why is interest in Emotional Intelligence Soaring? says it all.

Richard Boyatzis has co-authored several books and articles  with Daniel Goleman and his MOOC Inspiring Leadership through Emotional Intelligence has been downloaded over 100,000 times and he is always an interesting speaker.

I had not heard of Chuck Wolfe but he is another EQ heavy hitter and promotes a tool called the Emotion Road Map. I will discuss this in my next blog but what initially piqued my interest was the contrast between the two definitions of Emotional Intelligence.

The original definition by Salovey and Mayer said that for a person to be categorized as emotionally intelligent, they have to have four basic abilities: 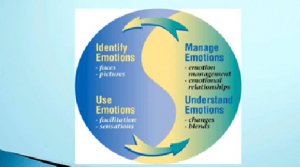 The Yale Centre for Emotional Intelligence (Peter Salovey is now President of Yale) now uses a mnemonic RULER.  Emotionally intelligent people have five skills: they can Recognize, Understand, Label, Express and Regulate emotions in themselves and others.

Daniel Goleman has a different definition.  He defines Emotional Intelligence as having four domains and a dozen competencies as in the following diagram.  Note that in his seminal book published in 1995 he had a fifth domain, Motivation, which he no longer includes. 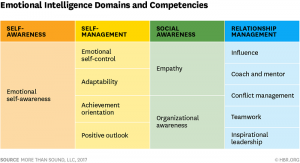 I much prefer the Goleman model to the Salovey-Mayer model.  The problem with the Salovey-Mayer model is that it defines transient emotions as the most important.  This is just impractical. It has been estimated that 95% of our waking hours are affected by an emotion.  The average emotion last six seconds.  That means we pass through 9,600 emotional states per day.

I believe that what is essential in lifting your Emotional Intelligence is an understanding of temperament, which is that part of the personality that is genetically based and is what determines our habitual emotional response.

Salovey-Mayer proponents do refer in passing to some people having typical ways of looking at the world and call these dispositional traits. I would argue the opposite and say all of us have core dispositional traits and that it the mixture of these traits with some being dominant and others weak that make us all unique.

The model that I have found best at explaining temperament is the 7MTF (Seven Motivational Temperament Factors).   This model says we are all slightly insane and as I get older, I am more and more relaxed about this hypothesis. The model also says we have seven core emotional drives each based on a common form of insanity. Where we are on the spectra of these seven drives determines our habitual emotional response.

If you want to learn the core emotional drives in your temperament do this five-minute quiz.

If you want to learn more about the 7MTF watch this short 4-minute explainer video. This is also free.

If that awakens your appetite to lift your EQ this online-video course: Introduction to Practical Emotional Intelligence: The 7MTF is now available for only A$99,