Book Review: The Meaning of Madness: A Critical Guide to Mental Health and Illness by Neel Burton 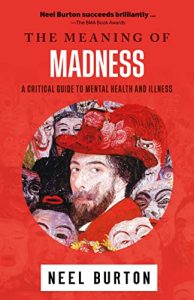 I came upon this book quite by chance.  I had been sent a recommendation by Amazon for his book Heaven and Hell: The Psychology of the Emotions.  When I started doing some research, I discovered that it was the third book of five in a series called Ataraxia.  This is a Greek term I had never heard of but means ‘lack of disturbance or trouble’.

Now some readers may know that I promote as a people-profiling tool, the 7MTF.  This tool is based on the Humm-Wadsworth system which turn was based on a model developed by Rosanoff in the early 1900s.  The Rosanoff model is based on two concepts: we are all slightly mad and that our temperament is based on our positions on five spectra of common mental illnesses.  So when I discovered that Burton’s first book in the series is The Meaning of Madness I thought to myself I have to begin at the beginning.

The book does a good job of explaining the various forms of madness: schizophrenia, depression, bi-polar disorder, anxiety, suicide and self-harm.  He writes from the perspective of an intelligent yet sceptical healer and I confess I liked his style.  He makes some very interesting observations about how social ‘norms’ can affect mental illness.

He covers a wide range of topics and his philosophic explanations of the work of Freud, Jung, and the existentialist writer such as Sartre on death and the secrets to a good life were particularly relevant to someone soon to celebrate his 77th birthday.

I also liked his analysis of Diagnostic and Statistical Manual of Mental Disorders (DSM-5).  I think it is fair to say he has fairly critical view.  I was particularly struck by his observation that two-thirds the experts who helped to compile the DSM had a link to a drug company.  DSM-5 has often been criticised for the expansion of diagnostic criteria that has increased the number of “mentally ill” individuals and/or pathologized “normal” behaviour.  In turn Big Pharma has developed new ranges of medications for which the evidence of remedy is let us say weak.  Burton is definitely in the ‘critical’ camp and further convinced a sceptic like myself.

I have given the book four stars on Amazon.

This review was first published on LinkedIn on 9 November 2021