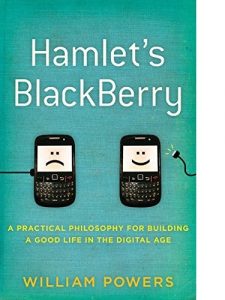 As readers of Te Humm Handbook: Lifting your Level of Emotional Intelligence are aware one of the five plays I analyse using the Humm profiling system is Shakespeare’s Hamlet.  So every time I see a book with Hamlet in the title I am curious.  So as I am dropping off some clothes to the local St. Vincent’s when I see Hamlet’s Blackberry in a carton of books so I ‘borrow’ it.

William Powers is the author; the book was published in 2010 and as the title suggests could be thought to be already dated.  However the book is even more topical now.  The question Power addresses is how, in this increasingly hyper-connected world, do we achieve depth and meaning in our lives?  It is a question more and more of us are asking particularly as we age.

The approach Powers takes is to look back in history to learn from what he calls the “Seven Philosophers of Screens” ranging from Plato to Marshall McLuhan.  This is probably the most interesting part of the book.

For example Plato describes how Socrates and a student take a walk outside of the busy connected life of the city of Athens in order to engage in some meaningful dialogue.  We should do the same with Social Media and our various screens.  Powers shuts down his Wi-Fi modem over the weekend.  I restrict my social media use to LinkedIn.

Another technique is to create an inner space by focusing one’s attention on one subject or one person at a time while blocking out all other distractions.  Seneca did this by writing letters to friends.  I do the same by writing blogs such as this one.

Hamlet’s blackberry is actually an ‘erasable table’ developed during the time of Shakespeare.  It was a pocket-sized booklet made of specially coated parchment or paper.  You could use a metal stylus to write on it , then when finished, a sponge to erase and reuse.. This became a popular new way to jot down notes while traveling and became known as a writing table.  Hamlet refers to ‘my tables’ in Act 1, Scene 5, Lines 105-110.  Richard Branson is modern practitioner of this technique.

The most sacred city of the ancient Greeks was Delphi, which is located in a valley of overpowering grandeur and solitude next to Mount Parnassus.  It was the home of the famous Delphic oracle and was the centre of faith to the Greeks much as the Vatican today is for Catholics.  The largest building in Delphi, the Great Temple of Apollo, housed the Omphalos.  This was a stone, shaped like a half egg, which was believed by the Greeks to be the centre of the universe.  Inscribed on the walls of the Great Temple were the two great commandments  of Greek life: “Know thyself” and “Everything in moderation.”

It is fair to say that the second commandment is the key message of Powers.  He is not a technological Luddite – instead he is saying we need to moderate our use of technology particularly screens and social media.  More importantly he provides in this book some practical ways of doing this by using philosophers.  He brings to mind the famous aphorism often attributed to Yogi Berra: In theory there is no difference between theory and practice. In practice there is.