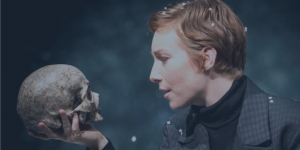 With events being closed all over Sydney because of the audience limit of 500 people imposed by the Federal and NSW State Governments because of the Covid-19 pandemic, it is pleasing to report that there is one event you can attend. It is the Bell Shakespeare production of Hamlet, currently performing at the Playhouse theatre of the Sydney Opera House which has a capacity of 398 people.

I went last Tuesday. I must confess that I went with some trepidation. Hamlet is played by Harriet Gordon-Anderson. Ophelia is played by Sophie Wild, who is coloured. The role of Guildenstern is played by another female – Jane Mahady. I thought the evening was going to be filled with Sydney “Wokeness”. Instead it proved to be a terrific evening and certainly one worth attending.

Afterwards I tried to work out why? I think the reason is that this Hamlet is believable as a young student who is a teenager attending the University of Wittenberg. In the gravedigger scene Hamlet’s age is given as 30. Furthermore if Hamlet rode on Yorick’s shoulders and kissed his lips at age four or seven, Hamlet is 27 or 30. On the other hand the characterisation of Hamlet is someone who is younger.

The reason for this inconsistency is that the original script versions of Hamlet did not contain the reference to Hamlet’s age. The earliest published version of Hamlet published in 1603 omits the gravedigger’s 30-year statement entirely, and has Yorick in the ground only 12 years instead of 23—making Hamlet 16 or 20. These amendments were added later on along with Gertrude’s description of Hamlet in the fencing scene: He’s fat, and scant of breath. Supposedly all these amendments were done to cater for Richard Burbage, the lead actor in Shakespeare’s theatre company, the Lord Chamberlain’s Men.

So Hamlet, perhaps the greatest role in English theatre (and the most words in the Shakespeare canon) has typically been played middle aged men pretending to be 30. Laurence Olivier was 41 when he played Hamlet in his famous 1948 film. On the other hand, Harriet Anderson comes across as a believable teenager stunned that his father is dead and his mother has married his uncle less than two months after his father’s funeral. She is reality.

The other moment in the play that really resonated was the great line of Claudius “When sorrows come, they come not single spies, but in battalions.” You felt that Shakespeare was speaking to us directly from 400 years ago and describing perfectly the current zeitgeist. The audience went very quiet at that moment.

If you are interested in my profiling of the various Hamlet characters and lesson for managers and leaders I have written an e-book available on Amazon: The Emotional Intelligence of Hamlet.

This blog was first published on LinkedIn on 16 March 2020.