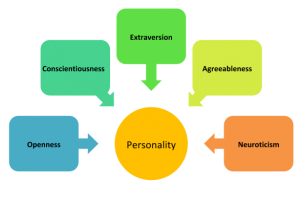 In this series of reviews I am dissecting Jordan Peterson’s new course: Discovering Personality. The course costs US$140 and comprises eight lectures and includes a personality assessment co-devised by Peterson himself. If you are interested in personality and what makes people tick it is worth doing. Let me again declare I am a big fan of Peterson. I think his book is excellent: I reviewed it here. His stance of telling the truth and not bowing to political correctness is outstandingly commendable.

In my first review I considered Extraversion and the two Peterson sub-components: Enthusiasm and Assertiveness. In this review I am going to consider Neuroticism (subdivided into Withdrawal and Volatility) and Agreeableness (subdivided into Compassion and Politeness)

Firstly I completely agree that volatility is significant component of Neuroticism. People who are at the lower end of the Neuroticism spectrum are emotionally stable, calm and composed. They are consistent in their behaviour, self-reliant, and display excellent emotional control. As we age our level of neuroticism declines and we become more conservative.

The 7MTF/Humm EQ component that correlates (in reverse) with Neuroticism is the Regulator/Normal. These people match the profile of people low in Neuroticism. They are self-reliant, consistent in behaviour, responsible, and unemotional. They conform to the norms of society. The first question they ask when presented with something new is “Who else is doing it?”. They need a precedent and are driven by a desire for order.

People at the higher end of the Neuroticism spectrum (low in Regulator/Normal) are the opposite. They need the attention of others; suffer from acute anxiety, disregard the norms of society and are emotionally erratic. Where I differ from Peterson is that he believes Neuroticism and Depression are linked. There is no question that people high in Neuroticism can suffer from anxiety complexes but I believe mental illness underlying the Neuroticism domain is neuroticism; no more and no less. If you include withdrawal as a subcomponent it is not surprising that you end up with depression. According to Peterson people high in withdrawal are often feel blue, are filled with doubts about things and easily feel threatened, worry about things, are easily discouraged, and become overwhelmed by events. These are strong indicators of the mental illness of Depression. However, I believe that Depression is linked to another Big Five Domain: Agreeableness.

According to Peterson Agreeableness is the tendency to weigh others’ interests against your own. The trait is composed of two aspects: compassion and politeness. People who are high in compassion are interested in others’ needs and problems. They are sympathetic and generous with their time, and they are more likely to take the interests of others into account. They are both empathetic and sympathetic. They take time for others, are interested in their problems and try to do things for them.

The corresponding 7MTF/Humm component for Agreeableness is the Doublechecker. They are compassionate and sympathetic people. They do suffer from depressive feelings and feelings of inferiority. They have episodes of low energy and tend to procrastinate over decisions. They are driven by a desire for security and the first question they ask when presented with something new is “What are the risks?”. They are often hypochondriacs.

According to Peterson the other aspect of Agreeableness is Politeness. People high this aspect have respect for authority and are not pushy or insulting. They don’t try to take advantage of others or imposing their will on others. They avoid conflict. All these are also traits found in the Doublechecker. Some are also found in the Regulator/Normal.

Where I disagree with Peterson (and many other Big 5 commentators) is the profile of people with low Agreeableness. Such people are described as stubborn, callous, ruthless, and vengeful. Although these descriptions sound very negative, there are some advantages to being low in agreeableness. For example, disagreeable people get paid more on average for the same work (because they ask for higher wages), are unlikely to be used by others, and do not become resentful because they don’t do things they don’t want to do. Almost all of the most disagreeable people are men, and almost all of the most agreeable people are women.

In the 7MTF/Humm these are the traits of people with high Politician. These people are decisive, assertive, opinionated and direct. They are driven by a desire to win and are very competitive. They seek leadership positions and are often regarded as arrogant.

On the other hand according to the 7MTF/Humm people low in Doublechecker are impulsive, over-energetic, over-confident, low in anxiety, risktakers, and cannot relate to pessimism.

How can we decide between these two models? To me one way would be to see if you could think on anyone who combines a high Doublechecker with a high Politician which under the Peterson model is logically impossible as it would be combining high and low agreeableness.

May I put forward John Howard, the second longest serving Prime Minister of Australia. This is an excerpt from The Humm Handbook that I wrote in 2007:

Howard has only one of the three usual leadership emotional drivers, the P component. He is articulate, good in debate and certainly persistent. His other two strong components are the Normal and Doublechecker. Howard comes across a compassionate, conscientious individual. The Labor party often tried to criticise Howard for being over-cautious and dithering. Howard certainly appears as if he dislikes making decisions which is in conflict with his P component. Ps generally like to make decisions. On the other hand, if a D decides to adopt a cause, he can attack it with an energy and persistence that surprises his colleagues. So it is with Howard when he attacked the issues of gun-control and tax reform.

The other strong component in Howard’s personality is his Normal component. He dresses conservatively, comes across as a logical decision maker, and even now after substantial media scrutiny is still regarded by many as “Honest John.”

Normally if your temperament is high in both Doublechecker and Politician you have a problem. You suffer from underlying feelings of insecurity but attempt to mask these feelings beneath a veneer of aggressive criticism. You like to look important but will probably never be satisfied. You will be outspoken in criticism of your work situation and will be disgruntled without cause. Often your attitudes have an undertone of bitterness.

However if you have a high Regulator/Normal like Howard these negative characteristics are ameliorated. The Doublechecker and Politician work together and you become a cautious decision maker basing your choices on your principles. In this case Howard was a conservative and while he was a bête noir to the Left, the decisions of his government were generally politically and economically sound

This blog was first posted on LinkedIn on 2 February 2020

Interesting points. I enjoyed hearing your thoughts. I've been listening to a lot of Jordan Peterson and reading about the big 5 so I was very intrigued to find out JP has a course on personality. It occurred to me as I read this, that while I agree with you that ppl low in agreeableness are less likely to be used and earn higher wages, I don't agree that 'disagreeable ppl....do not become resentful because they don’t do things they don’t want to do.' is an advantage of low agreeablness. Not bc it's not true. I think it is true. It's bc agreeable people don't necessarily get resentful either unless they're high in neuroticism. Agreeable people don't find it that difficult to turn something they don't want to do into something they do want to do (speaking as one of them). Resentment is more a result of high neuroticism (emotional volatility) than low or high agreeableness.