Review of Tyrant: Shakespeare on Power by Stephen Greenblatt 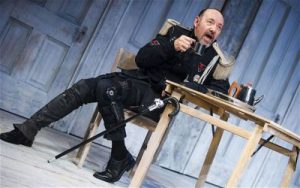 Two friends over a dinner not only highly recommended this book but lent me a copy.  Stephen Greenblatt is an American Shakespearean literary historian and author. He is a Professor of the Humanities at Harvard University. The book is gallery of tyrants from the Shakespeare canon: Julius Caesar, Richard III, King Lear, Macbeth. Yet one name hovers on nearly every page of: that of the 45th president of the United States.  Greenblatt freely acknowledges that the 2016 presidential election inspired him to write this book.

The strongest part of “Tyrant” is Mr. Greenblatt’s opening analysis of the three “Henry VI” plays and “Richard III” in the first six chapters.  These are among the earliest scripts Shakespeare wrote.  Henry VI is rarely performed but I have seen two performances of Richard III in last decade: Kevin Spacey in 2011 and Kate Mulvaney in 2017.

Greenblatt believes that tyrants are made, not born but they do not arise in a vacuum.  In his single-minded pursuit of power, the tyrant destroys everything that makes life worthwhile and ends up unhappy and alone. Moreover, as politically savvy as the tyrant may seem, he doesn’t know how to rule effectively;

To answer the question how is it possible for a whole country to fall into the hands of a tyrant Greenblatt splits question into two:

The first he answers by using the Duke of York who encourages the rabble-rousing fantasies of Jack Cade, a populist leader to foment a rebellion against Henry VI.  Cade “promises to make England great again.” Cade doesn’t talk about tax cuts; he promises a primitive form of communism: “All the realm shall be in common.”  And “bread shall only cost 7 loaves for a penny.”  The populace are lulled into complacency or willingly manipulated by fear mongering or false promises.  Tyrants often value popular support and try to curry it with sham-everyman gestures. “Populism looked like an embrace of the have-nots, but it was in reality a form of cynical exploitation. The unscrupulous leader had no interest in bettering the lot of the poor.”  York hopes the disorder will allow him to advance the interests of himself and his party. York fails, but his son ascends the throne as Edward IV

According to Greenblatt the second issue is made possible by the drive for power by the tyrant who is supported by passive apparatchiks.  Richard III achieves power not through a direct act of violence but as the result of an election. Richard conducts a political campaign, complete with a fraudulent display of religious piety, the slandering of opponents, and a grossly exaggerated threat to national security

Richard III is pathologically narcissistic and supremely arrogant. He has a grotesque sense of entitlement, never doubting that he can do whatever he chooses. He loves to bark orders and to watch underlings scurry to carry them out. He expects absolute loyalty, but he is incapable of gratitude. The feelings of others mean nothing to him. He has no natural grace, no sense of shared humanity, no decency.

He is not merely indifferent to the law; he hates it and takes pleasure in breaking it. He hates it because it gets in his way and because it stands for a notion of the public good that he holds in contempt. He divides the world into winners and losers. The winners arouse his regard insofar as he can use them for his own ends; the losers arouse only his scorn. The public good is something only losers like to talk about. What he likes to talk about is winning.

What excites him is the joy of domination. He is a bully. Easily enraged, he strikes out at anyone who stands in his way. He enjoys seeing others cringe, tremble, or wince with pain. He is gifted at detecting weakness and deft at mockery and insult. The skills attract followers who are drawn to the same cruel delight, even if they cannot have it to his unmatched degree. Though they know that he is dangerous, the followers help him advance to his goal, which is the possession of supreme power.

His possession of power includes the domination of women, but he despises them far more than desires them. Sexual conquest excites him, but only for the endlessly reiterated proof that he can have anything he likes. He knows that those he grabs hate him.

As you can gather Richard III is a proxy for the person elected to serve as the 45th president of the United States of America.  Both of them in 7MTF terms are dominated by the GoGetter and Politician components and have a lack of moral compass due to a low Regulator component.

Greenblatt describes in some detail the “enablers” — the apparatchiks on those whose self-deceit, ambition, complacency, and moral-political blindness enable Richard to rise.  Some are fooled, some are frightened, some are blind to his psychopathic behaviour, others persuade themselves they can take advantage of Richard’s rise to power.

I am the first to confess at the end of the first six chapters I was saying to myself “How good is Shakespeare?”

It is the second half of the book that the book falters.  For example, Lear is characterised as a tyrant.  I must disagree having blogged about Lear here and here.  The tragedy of Lear is that, having become habituated to power, he must live with the consequences of his abdication.  He does have a very strong Politician but little if any GoGetter.  His Regulator is also low but during the play gradually increases.

Nevertheless, the book is well worth the read, particularly the first six chapters.

This blog was first published on LinkedIn https://www.linkedin.com/pulse/review-tyrant-shakespeare-power-stephen-greenblatt-christopher-golis