The Emotional Intelligence of Ken Henry 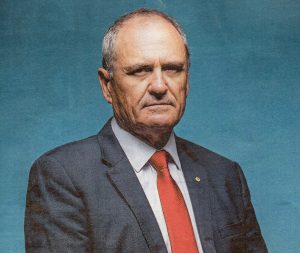 It is not often that you get a chance to see hubris in action but we in Australia have just seen one of the greatest exhibitions in my lifetime.  For those unfamiliar with the term hubris is a Greek word meaning an extreme and unreasonable feeling of pride and confidence in yourself.  On 4 February 2019 Commissioner Kenneth Hayne, delivered a scathing commentary on Ken Henry’s testimony before the Royal Commission on Banking last November describing it as pompous and arrogant.  Henry’s reaction the report was telling “I am disappointed that the Comissioner formed this view.  I know that it is not so.”  The irony is that Henry, alone among the Chairmen of the major Australian Financial Institutions, was the most enthusiastic abobut the Royal Commission going ahead saying he welcomed the scrutiny.

So what makes Ken Henry tick?  He spent 28 years in the Canberra Public Service rising to the top position, Head of Treasury and special adviser to the Prime Minister.   You do not achieve that unless you have a lot of the Politician component.  However the picture of him in the February 2019 edition of The Deal is also revealing.  Henry is wearing a red tie, which is classic signal of the GoGetter/Hustler component.

Visitors to my website know you can complete a simple five-minute quiz and receive back a one-page analysis of temperament and dominant emotional intelligence components.  If Ken Henry did the quiz, this is the report I think he would receive.

These people are hardheaded, realistic, shrewd and entrepreneurial, alert to opportunity, task focused rather than people centred and determined to beat the opposition and reap rewards. They can be quite tough in their treatment of others and will often achieve positions of importance, despite a lack of participative leadership skills. They take a strong, uncompromising, autocratic approach in management, are expedient in decision-making and tough on the opposition.

They will continually seek personal advantage, power through financial and material gain and they want to achieve a position which gives them personal status and esteem in the community. These are strong ego drives, with little regard for people who get disadvantaged in the process. They will criticise those things they see as getting in their way, whether it be bad luck, company regulations, the work of the opposition, or the contribution (or lack of contribution) of their subordinates or associates. They are sensitive to slights to their position or to their authority. Where they feel under threat they are outspoken in their own defence and will seek to protect their own interests first.

Their work style is generally dynamic, hard driving, obviously concerned with achieving personal success and equally concerned with the size of the rewards they can gain. Whilst they take a positive attitude towards challenge, by no means will they persevere indefinitely. They are quick to size up a situation, and, where they assess that success is not going to come, they will quickly change emphasis or priority.

Their interpersonal style is not going to win them any friends. While civilly polite as a rule, there is a ruthless quality present, coupled with a lack of concern about what other people are thinking and feeling. Everything they do centres around what they think should be done and this will not engender caring regard from others. Mind you, they are not at all put out by the fact that few people want to be friendly, for their high opinion of themselves sees them not recognising others as equals. They are quick to step into positions of personal power, even when not formally accredited, and their leadership style will be dictatorial rather than taking a team approach.

Note that many CEOs would have a similar profile.  They talk about focusing on people and customers, but their principal focus is on themselves, their rewards and their status.

Confirmation of this attitude was described in this wonderful article that appeared in the Australian’s Margin Call column on 13 February 2019.  The NAB Board invited former Australian Treasurer Peter Costello to lunch to advise on restoring the NAB’s battered reputation.  His first recommendation was to develop the relationship with current Treasurer, Josh Frydenberg.  It turned out not one of the nine NEDs had any relationship.

Costello, a proud Melburnian, then also asked which of the directors at the Melbourne-headquartered bank lived in the city.  Apparently Costello’s jaw dropped at the answer: not one of them did.  Indeed, none of the nine independent NAB board members live in Victoria.

This is unbelievable.  If there is one task which the responsibility of the Chairman it is the composition of the Board.  However if there is one temperament combination that could select a Board of a major institution where there is no overlap between the Head Office location and the homes of the Independent Non-Executive Directors, it is a Hustler/Politician,

This blog was first published on LinkedIn 18 February 2019.