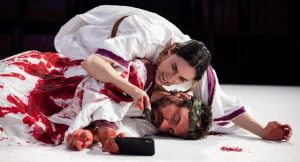 In the third and final part of The Humm Handbook: Lifting Your Level of Emotional Intelligence I make use of an idea developed by my tutor at the London Business School, Charles Handy.  Charles thought that the problem with most MBA business case studies is that they dated very quickly.  Instead, he organised an MBA elective studying the leadership lessons from the great plays of the Western Canon.  It was one of the best courses that I ever did.

So in the book as a homage to Charles, I discuss five case studies: Antigone, Julius Caesar, Hamlet, King Lear and Death of a Salesman. After a plot summary, the main characters in the play are analysed using the Humm technology. Did they succeed or fail and if so, how and why? What were the flaw in their temperament? The book then looks at the key decisions made in each play and what it reveals about the emotional drivers of the various characters. Finally, each case study concludes by drawing some business lessons from the characters and the play.

When one of these five plays is being performed in Sydney I usually take the opportunity to go along and see the production.  Last night I went to the new Sydney Theatre Company production of Julius Caesar, its first show since the lifting of the COVID restrictions.  It was unlike any theatre production I have seen.  Only three actors perform a number of characters using smartphones for close-ups that are then shown on four screens mounted as a large cube that drops and rises during the performance.  The screens are also used for recorded video and social media outtakes.  For example, the beginning of the production describes the history of the Roman Republic especially the important role that the ancestors of Brutus played in the formation.

The cast is on-stage for nearly the whole production and do a pretty good job.  If I have a complaint, it is more about what is added then what is left out.  For example, Geraldine Hakewill who plays Casca and Marc Anthony, is particularly good in the smart phone close-ups.  She has a very expressive face.  Her delivery of the famous funeral oration is excellent but that is followed by a collage of contemporary political rhetoric that while amusing goes on for too long and demonstrates the power of Shakespeare’s English.  I also found it disconcerting that a man who claims to be blunt and lacking elite finesse is wearing glitzy Louboutin high heels.

I always think of Julius Caesar as really a play about three people: an idealist (Brutus), an egotist (Julius Caesar) and a psychopathic realist (Cassius) so it somewhat surprised me that one actor got two of these roles (Ewen Leslie plays Caesar and Cassius), Zahra Newman plays Brutus, and Geraldine Hakewill misses out.  As many observers have noted this play belongs to Brutus.  To me the two characteristics of Brutus that did not come across were his passive stubbornness and logically argued yet impractical decision making.  On the other hand, I did think Ewan Leslie did convey the exasperation of Cassius with the arguments of Brutus very well.

At the end of play there is long history timeline of snap shots of emperors, kings, and political leaders.  As I was walking down the long hallway back to Hickson Street I thought nearly all of them were male and white and the founders of Western Civilisation.  There is a lot of media overlay in the production that the that threats to democracy did not end with the Roman Empire.  Some of it is clumsy but when you think of the freedoms that we ourselves have suffered during the past two years I would like to see a number our political leaders watch this production.

The is an e-book available of my analysis: The Emotional Intelligence of Julius Caesar

This blog was first published on LinkedIn on 26 November 2021.