The Best Way to Succeed is to … 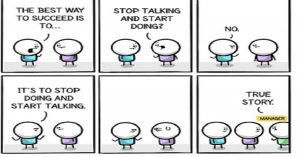 I was recently sent the above cartoon by Rupert (Robert) Bolton, one of my EQ coaching clients.  Rupert is a raging Engineer.  Not only is he keen on managing projects well he has written a book about how to it: The Executive Guide to Breakthrough Project Management.

The cartoon particularly resonated with me because I am now working on Lesson Six: Combinations in my new course Practical Emotional Intelligence for Leaders and Managers.  One of the more common combinations, particularly with men, is the Politician-Engineer, and both Rupert and I are typical P-Es.

One of the great weaknesses of the Politician-Engineer is the propensity to talk rather than listen.  Thus Rupert sending me this cartoon has shown be that he has developed one of the key elements of emotional intelligence: Self-Awareness.

My own journey of increased self-awareness started in 1976 when I had just been fired by a newly appointed corporate psychopath and was unemployed.  One of the executive recruiters I approached was Chandler & MacLeod who asked me to complete the battery of IQ and personality tests.  I will never forget the follow-up interview.

Being fortunate to born with a high IQ and having two degrees from Cambridge and the London Business School, I was expecting an easy interview.  The psychologist began the interview by saying, “You have a big problem as a manager.”

Somewhat surprised I replied, “What do you mean?”

He then began to explain why.

“You have a lot of Politician in your temperament.  That means you want to win every argument.  Not only that because you are bright you are generally right.  What makes it worse is not that only do win the argument, because of you high Engineer you try and win it with crushing detail.  Managers do not only need to talk, they need to listen,”

Thus began my own journey self-awareness.  The best book on listening I have come across is Just Listen by Mark Goulston.  I blogged about it in November 2019 and the blog contains a number of useful tips.

The best story I have heard about listening was about a CEO who was being lauded by the business media for achieving a stunning turnaround.  I cannot remember his name but I do remember his reply when asked by a reporter what was the secret of his success?

His reply: “At age of 50 I finally learned to shut up and listen.”